Questions and Answers about the Rosary

Attending a Catholic Church one evening I was disgusted by the rigmarole called the Rosary. What is that Rosary?

The Rosary is a special form of devotion to Mary. One takes a set of beads, divided into five sections, each section consisting of one large bead and ten small ones. Holding the large bead, one says the Our Father, and on each of the small ones, the Hail Mary. Between each section or decade the Gloria is said. Whilst saying the prayers, one meditates or thinks of the joys, or sorrows, or glories of Christ’s life and of that of His Mother. It is a very beautiful form of prayer with which you were disgusted merely because you did not understand it.

The Rosary is a relic of the superstitious middle ages, when it was meant for ignorant people.

The use of beads dates from the earliest centuries. The prayers embodied in the Rosary were composed by Christ Himself in the case of the Our Father, and by the Angel Gabriel, St. Elizabeth, and the Council of Ephesus in the 5th century, in the case of the Hail Mary. We are in very good company with those prayers. As a devotion, with its loving contemplation of the mysteries of the life, death and resurrection of Our Lord it appeals to rich and poor, to learned and ignorant alike, as Christianity itself was meant to do.

When were beads invented, and what do they symbolize?

It is impossible to say when beads were first used. As an aid to memory, the early Christians used to put a number of pebbles in one pocket, transferring them to another as they said each prayer, so that they could be sure of completing such prayers each day as their devotion inspired. Later, berries or pebbles were strung together for the purpose. In the middle ages sections of these beads were adapted to the different meditations which compose the Rosary, the sections being a numerical help to meditate for a given period of time upon each allotted subject. The symbolism is expressed in the word Rosary. A Rosary is a garland of flowers. One rose does not make a Rosary. Prayers are the flowers of the spiritual life, and in offering that group of prayers, known as the Rosary, we lay a garland of spiritual flowers at the feet of God.

Christ did not have a crucifix or Rosary beads.

Between each Our Father to God, it throws in ten prayers to Mary!

You’ve got it the wrong way round. Between each ten Hail Marys an Our Father is said. The Rosary is essentially a devotion to Mary, honoring her whom God Himself so honored. And it honors her particularly in her relation to Christ, whose life is the subject of the meditations. The Our Father abstracts from the incarnation of Christ; the Hail Mary is full of reverence to Our Lord’s birth into this world for us.

Would not the Rosary be just as efficient if said with one Our Father, one Hail Mary, and one Gloria?

It is not. Christ said, “Use not vain repetitions as do the heathen, who think in their much speaking to be heard.”

Vain repetition in the manner of heathens is forbidden, but not useful repetition which is not in the manner of heathens. Vain repetition relies mechanically upon the mere number of prayers or formulas uttered. But Catholics do not rely on the mere repetition of prayers, nor upon their multiplication, but on the intrinsic worth of each prayer and upon the fervor and earnestness with which it is said. Two prayers said well, one immediately after the other, are as good as the same two prayers said well with twenty-four hours between them. Time is nothing to God, in whose sight 1000 years are but as a day. He does not mind whether there be two seconds between our prayers or two years; the prayers themselves are just as pleasing to Him. If you take the principle behind your objection, and push it to its full conclusion, you could say the Our Father but once in your life. If you said it once each year, it would be repetition. How often may you say it? Once a month? Once a week? Once a day? If daily, what would be wrong with saying it hourly? If you have just concluded one Our Father, why may you not begin it again at once? Does it suddenly become an evil prayer?

If repetition adds to effectiveness, why stop at ten Hail Marys? Why not more?

It is the nature of this devotion that the Rosary should be composed of decades, or groups of ten. It would not be the Rosary otherwise. Repetition certainly adds to effectiveness, if the prayers are said well. Just before His passion, Christ prayed “the third time, saying the self-same prayer.” Matt. XXVI., 44. He thought it good to say the same prayer three times in succession. Why did He limit it to three times? If good to say it three times, why not twenty times? He thought three sufficient for His purpose. So, too, we consider the period taken by the recital of ten Hail Marys sufficient time for the amount of reflection we desire to give to each mystery of the Rosary.

Does not Scripture advise short prayer rather than long Rosaries?

No. Long hypocritical prayers are condemned. Prayer may be prolonged, but it must not be hypocritical, mechanical, or insincere. Christ said, “We ought always to pray, and not to faint.” Lk. XVIIL, 1. Again, “Watch ye therefore, praying at all times.” Lk. XXL, 36. He himself “went out into a mountain to pray, and he passed the whole night in prayer to God.” Lk. VI., 12. “We cease not to pray for you,” wrote St. Paul to the Colossians I., 9. “Night and day we more abundantly pray for you,” he wrote to the Thessalonians I, 3, 10.

Short fervent interior prayers are better than long distracted vocal prayers. But, given equally fervent prayers said with due attention, long ones are better than short ones. It is certainly better to give more time to prayer than less! And if distractions do present themselves, it is better to give up the distractions than to give up the prayers. Mental prayer is good, but vocal prayer is equally good if said well, and sometimes better. Thus Christ taught the Apostles a vocal prayer called the Our Father. So well did they learn it by heart that they were able to write it down years later word for word.

Why do you omit from that Our Father the words “For thine is the kingdom, the power, and the glory forever and ever.”

Because Our Lord did not add those words to the prayer as He taught it. There is nothing wrong with the words in themselves. In fact, they are very beautiful. But they are not Sacred Scripture. Some early Catholic copyists wrote those words in a margin; later copyists mistakenly transcribed them into the text; and the Protestant translators made use of a copy of the New Testament with the words thus included. All scholars to-day admit the words to be an interpolation. We Catholics do not use them.

Please consider supporting us with a PayPal donation 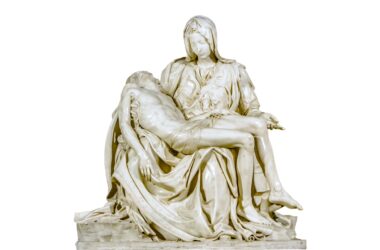 I Am Not Ashamed to Call Mary Mother!

St. Paul says, “For I am not ashamed of the gospel: it is the power of God for…
Read More 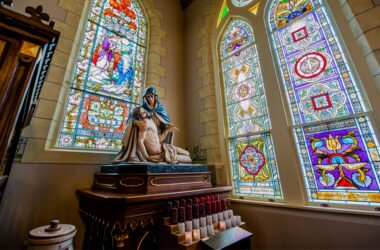 Questions and Answers About Devotion to Mary

St. Bonaventure said, “Into thy hands, O Lady, I commend my spirit.” Thus he served the creature more…
Read More 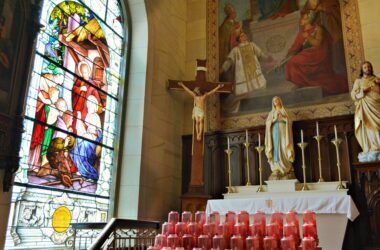 Questions and Answers About Images and Statues

Why are Catholic Churches decorated with images and statues in direct violation of the second commandment? The second…
Read More